The introduction of the game of rugby for women in Iran 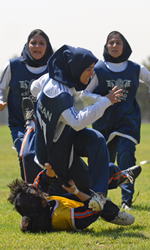 William Shatner’s Gonzo Ballet chronicles the quest to create a new ballet based upon Mr. Shatner’s critically acclaimed album, ‘Has Been’, which was produced by Ben Folds. The ballet was created by famed choreographer Margo Sappington.

The Forgotten Refugees explores the history and destruction of Middle Eastern Jewish communities, some of which had existed for over 2,500 years. Employing extensive testimony of survivors from Egypt, Yemen, Libya and Iraq, the film recounts the stories of “joy and of suffering” that nearly a million individuals have carried with them for so long. Segments on the contributions of Middle Eastern Jews to politics, business and music, testify to the enormously rich cultures which fleeing Jews left behind. The film weaves personal stories with dramatic archival footage of rescue missions, historic images of exodus and resettlement, and analysis by contemporary scholars, to tell the story of how and why the Arab world’s Jewish population declined from one million in 1945 to several thousand today.